*This book contains scenes that may be considered triggers. 18+ due to mature content*

When Charlotte Murphy escapes from the ruthless serial rapist and killer, Loverboy, she finds herself completely lost and scared to death. Lost, frightened, recovering, and in the sights of a brutal killer. In a most odd but clever tactic from the police, they assign Charlie 24/7 live-in protection; a move that is supposed to comfort her and make  healing easier. Somehow, despite the odds, Charlie finds a refuge in officer Nick Andrews and in his arms she finds the strength to heal and the courage to move on with life. Nick finds everything that he wasn’t looking for in Charlie’s eyes and a fight against a killer that becomes personal. She breaks down, sobbing in such a way I see her knees buckle for a moment. For the first time I feel the need to be truly protective, not just to keep her from harm but to comfort her. I hesitate for a moment, and then I wrap one arm around her. An ethical move but for some reason feels right and normal. Before I can stop her, she throws both arms around me and holds tightly. I pause and take one deep breath before wrapping the other arm around her. She pushes her face hard into my chest as she sobs. Unsure of what to do, I slowly bring a hand up to her hair and let my fingers run through it. She squeezes to me tighter and I find myself holding to her tighter as well, as though locked in my arms can take away the hurt and the pain that she is feeling right now.

“I won’t let him hurt you again, Charlie,” I say, letting my chin rest on the top of her head, “I promise.” 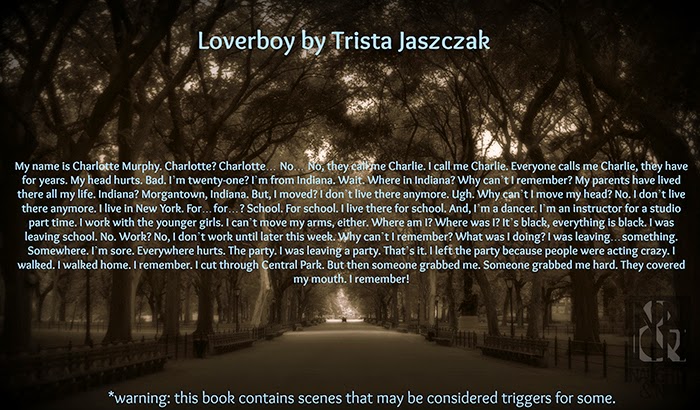 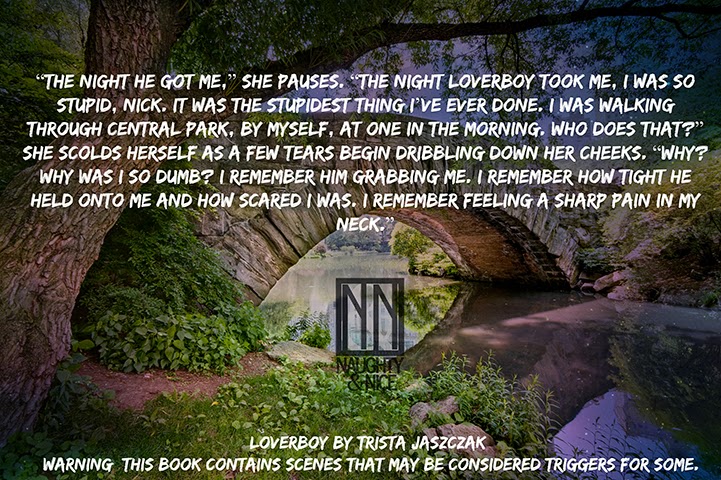 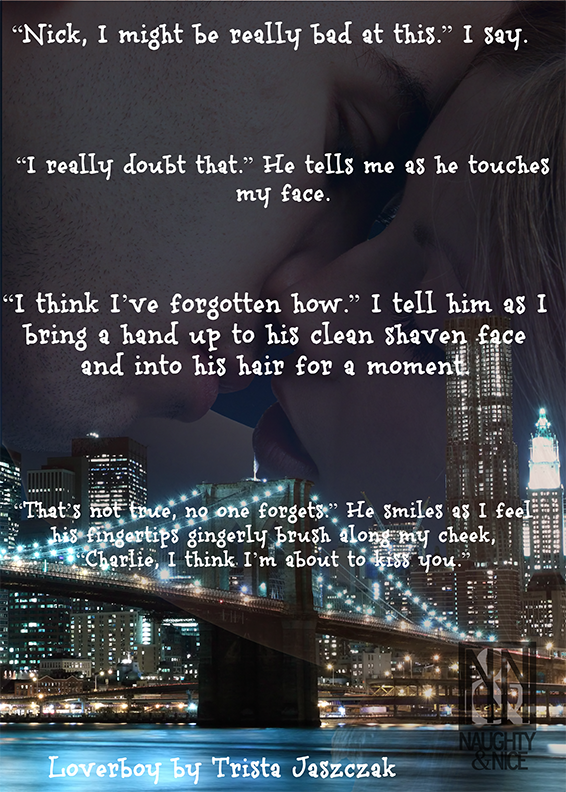 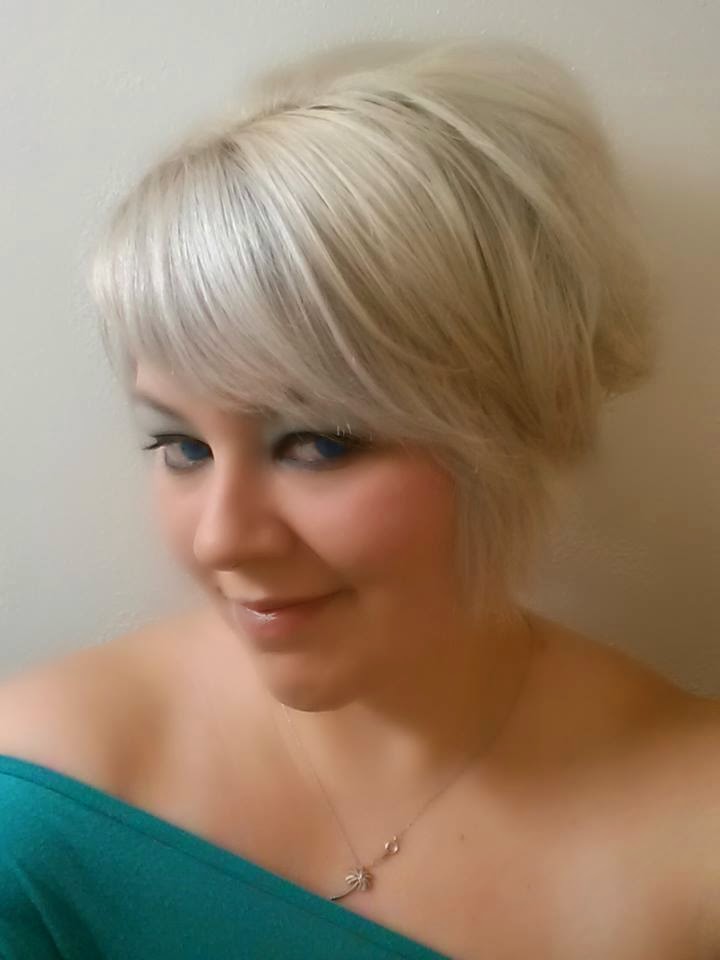 Trista Jaszczak (jazz-ick) is the bestselling author of Little Red (Believe book I) and Loverboy. She is a devoted Air Force spouse and mother to two mischievous and rambunctious little girls. She is originally from Hamilton, Ohio but calls home wherever the Air Force sends her. She currently resides in Anchorage, Alaska where she finds endless inspiration in the pure Alaskan wilderness. When she isn’t writing, she spends her time with her family in the vast Alaskan outdoors, plucking away at her old guitar or working on self-improvement in the gym. She loves the outdoors, the moon, old movies and music. 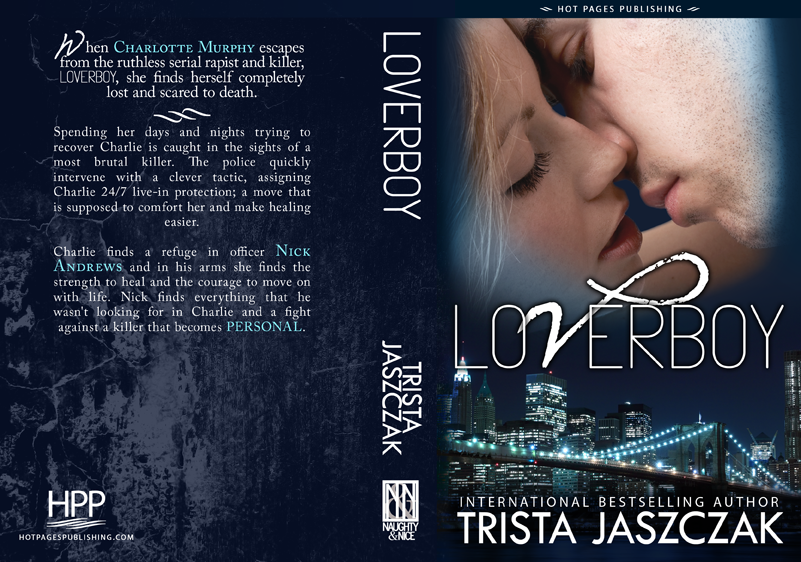 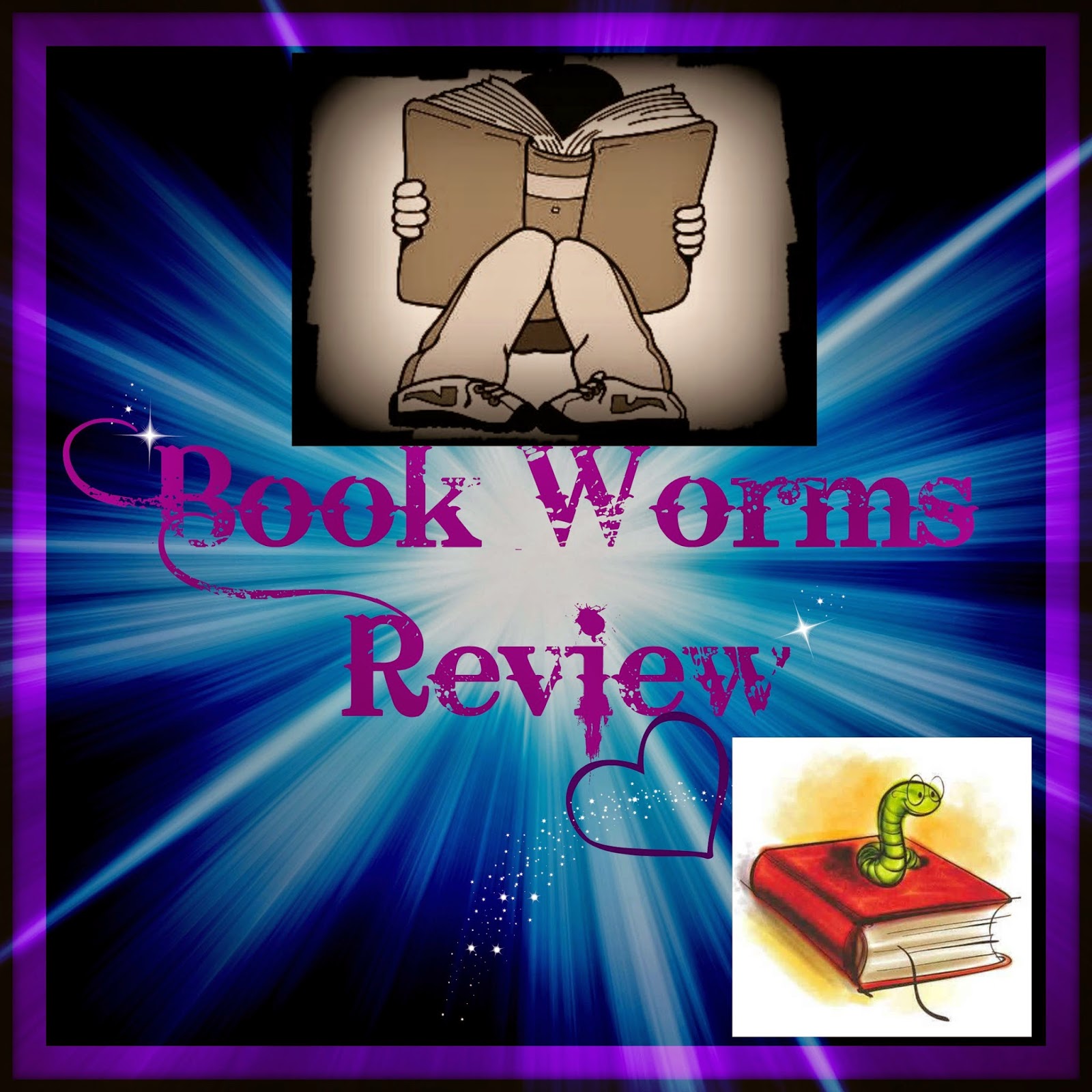 Review was left by Melissa a Book Worms ReviewerWho gave this book 3.5 stars. Thank you Melissa. murder, a rapist, a sadistic killer are what haunts Charlotte Murphy's dreams. Why? Because she escaped one and now he's after the one that got away. She's not sure how she did it but the police are not taking any chances with her safety while he's still on the loose. Their idea is to keep officer Nick Andrews close to her for protection. As in live-in close. She finds solace in the man who has taken her back, kept her safe and sane and the attraction can't be denied from either one of them. While it didn't start out this way, Nick will do anything to keep this monster from finding the person that has become most important to him safe and he will do whatever it takes.An opinion from me....I really wanted to love this book but it was ok. I had a hard time getting into the mundane everyday of Charlie's life in her one bedroom apartment. While I found it nice that her and Nick got to know each other as friends first and not just jump into bed with each other, it was bland. The repeated conversations, the repeated scenery was just kind of boring.The writing didn't flow very well, nor did the storyline. It jumped in different places that left me confused. Editing could have been a whole lot better. I would give this book a 3.5 for effort and I do think the author was on the right track with the story but it was very anticlimactic. This was a new author for me and I would try others as I think she had a great idea but this just didn't do it for me.