My Heart to Fear -- Lulu Astor 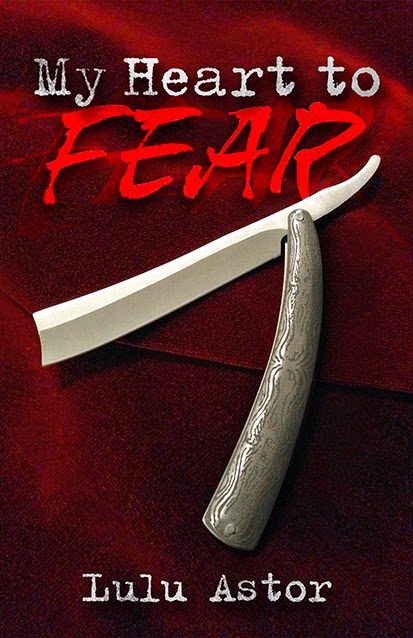 People were either slavishly devoted to Eric Damien or they jealously hated him. Sometimes even both.

Eric Damien hunted and fed off shyness and innocence. Ali Spencer was a sitting duck.

He would learn all of her secrets while he had her locked in his rooms and at his mercy. Appeasement of all of his desires was his own personal manifest destiny—he honestly believed that was true.

The small room was illuminated only by moonlight that trespassed between the wide slats of the white plantation shutters. By day the bedroom was cheerful, awash in feminine shades of the palest pink and green with scalloped white wood furniture and a small white iron chandelier dangling daintily from the ceiling. Now, after midnight, it was dark with silvery light pooling just below the large window. The room’s inhabitant was long asleep, her dark hair fanned out across the shell-pink pillow, framing her China doll face and roseate lips. She’d been tired, having endured a long day of anticipation. Right now her peaceful slumber was interrupted by an abrupt inability to breathe. The resulting gasping caused her to waken suddenly, panicked.
“Shhh. It’s just me. Stay still.”
The gravelly voice came out of the darkness. Ali knew it belonged to her aunt’s boyfriend. He’d told her to call him Uncle Joel but Ali had just met him four days before. Aunt Lauren and Joel were staying the week with Ali and her mother, visiting for Ali’s birthday—a surprise to make up for the fact that her father was away. But why did Joel keep coming into her room? Last night she’d awakened to find him looming over her with scary eyes. The night before that she bolted up from a deep sleep, afraid that someone was hiding in the shadowy corner near the drapes. And now this, tonight.
“Stop! Get off me! I can’t breathe… Maaaaa!” she screamed, feeling his hands all over her body. He clapped his huge hand over her mouth mid-scream, roughly grinding her lips into her teeth, abrading her gums. The taste of salty blood and her inability to draw any breath caused her to kick her legs wildly in boundless terror. Undeterred, his other hand yanked down her white cotton underpants covered in tiny blue rosebuds, as she desperately tried to squirm away, but he had her pinned down. A few inches were all she managed to travel before he swiftly halted her progress, grabbing her with both of his meaty hands and dragging her toward him. “Come back here, you little bitch. I’m not done with you. If you scream again, I’m going to spank your heinie bloody. Now shut up and be nice to me!”
He tore off her pajama gown and touched her naked body everywhere, putting fingers into her private places, licking her with his gross tongue, grunting and breathing noisily. He got spit all over her skin and it smelled sour. The nauseating odor rushed saliva into her mouth where it roiled with blood, and she began to choke as it trickled down her throat. Ali heard him unzip his pants and she didn’t know why but she was too frantic to wonder. He was in the process of flipping her over onto her stomach when she again screamed, this time at the top of her lungs, and then the door flung open so hard it slammed into the wall with a thunderous bang, leaving a crater in the wall the size of the doorknob.
She’d never heard her mother sound like she did, the blackest fury barely contained as she attacked the man with her voice. “Get off my daughter, you disgusting, vile piece of nothing,” her mother screeched at a bloodcurdling pitch. “I’ll rip your balls right off and make you eat them.”
Joel stood up. That’s when Ali saw he was in his boxer shorts, his pants around his knees. He scurried out of the room like a panicked rat, without a backward glance, as her mother came forward to embrace her daughter in her arms. The girl was trembling from head to toe and her nostrils were still filled with the man’s rank odor of stale beer and old sweat. She didn’t think she’d ever forget it.
“Shh, come sleep in my bed tonight. Everything will be fine, I promise,” her mother’s voice crooned but Ali had never heard it so shaky. As she hugged her mother, it was hard for her to tell which one of them trembled more. “Tomorrow is your birthday and we’re going to have so much fun. I’m so sorry, Ali. It will all be okay.” She tightly grasped her daughter, rocking her back and forth, over and over. They sat like that for nearly an hour. Ali sensed her mother’s uncertainty.
Finally, she released her grip and Ali scampered into her mother’s room, climbing up into the big bed. Nothing was as comforting as a mother’s bed and so she managed a small smile and curled up into a ball. If she made the ball really, really tight, the shivering stopped. From that night on, it was how she always slept, in a tight fetal position, impregnable and protected by her hard outer shell. Tonight, sleep was long in coming and she so wanted to get there so she could wake up and it would be morning—and not just any morning, but the morning of her tenth birthday.

Lulu Astor is a New York City girl, born and bred. She met her husband at a doggie play group in Tribeca in the ‘90s and together they embarked on adventures, moving first to Chicago, where their first son was born, then on to Santa Fe, New Mexico, followed by Los Angeles, Cali. Eventually they headed back to NYC where their second son made his debut shortly thereafter.

Beginning her writing career with nonfiction, she began writing short fiction (her first love) in grad school, moving on to longer works shortly thereafter. She wrote the Complements series in 2010, and it was published on KDP in 2013. Three and a Half Weeks was initially conceived as a short story but evolved into a full-length (very full) novel as time went on.

Immersing herself in fiction (whether reading or writing) every minute possible, she also teaches writing and literature as an adjunct professor in the New York-Connecticut area where she currently resides. Her books are available on Amazon, Barnes & Noble, Smashwords, and Goodreads. You can follow her on Facebook, Goodreads, and Twitter (reluctantly).